Cienfuegos, founded in 1819 by French settlers, is known as the Pearl of the South.

It receives this name from 1829 in honor to the Captain General of the Island of Cuba Jose Cienfuegos Jovellanos.

Its town center is quite homogeneous architecturally and has many classic facades and columns that recall its French past.

When you walk through its streets you forget for a moment that you are in Cuba. It emphasizes, in front of other cities, its cleaning and careful restoration of its buildings. 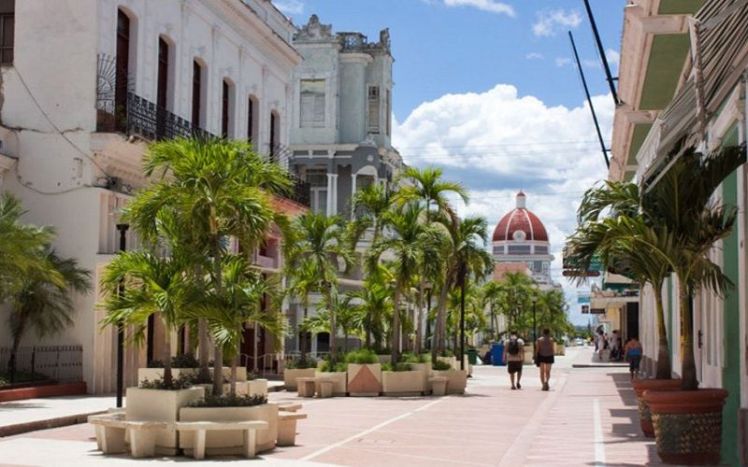 Situated around a bay, Cuba’s largest, it stands out for its colorful buildings, emerald green and turquoise blue.

It is full of coves, caves and reefs, but not forgetting the Natural Park of Topes de Collantes, where el Nicho stands out, a lush natural enclave.

We can highlight two distinct areas in Cienfuegos. On the one hand, the central zone where the Martí Park is and Punta Gorda on the other, full of numerous palaces from the beginning of the 20th century. 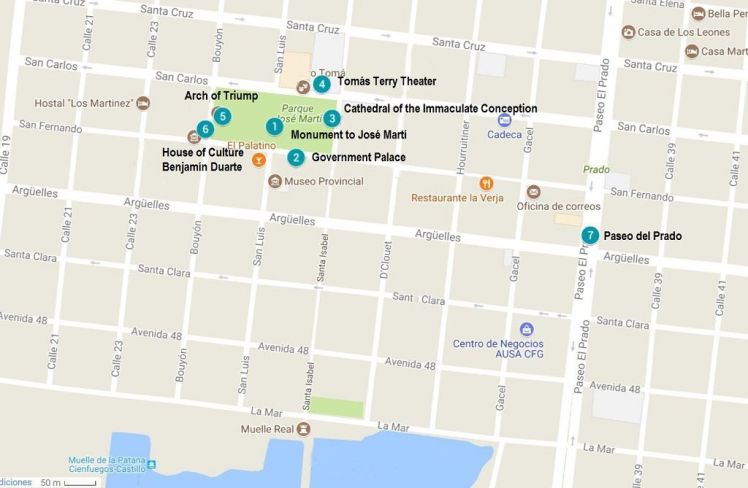 Take in the center and around you will be able to enjoy its impressive constructions that will take you to the time of the French colonization, with its impressive buildings full of color.

In 1957, it was the place where the popular uprising against Batista took place.

The statue of José Martí made in marble stands out in the center. 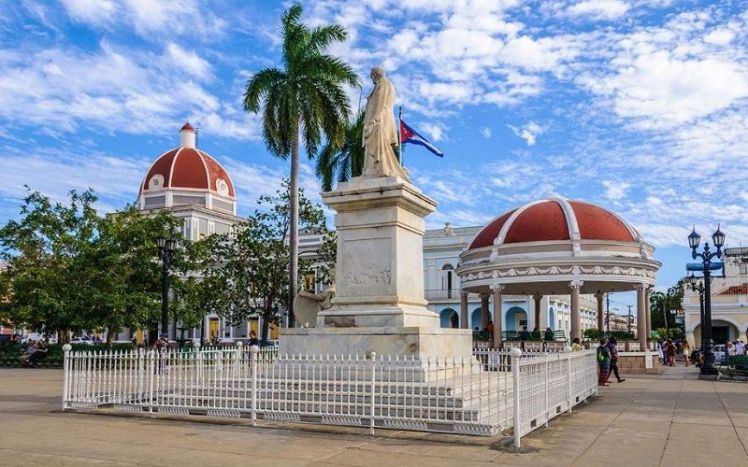 In the surroundings of this park stands the Government Palace. 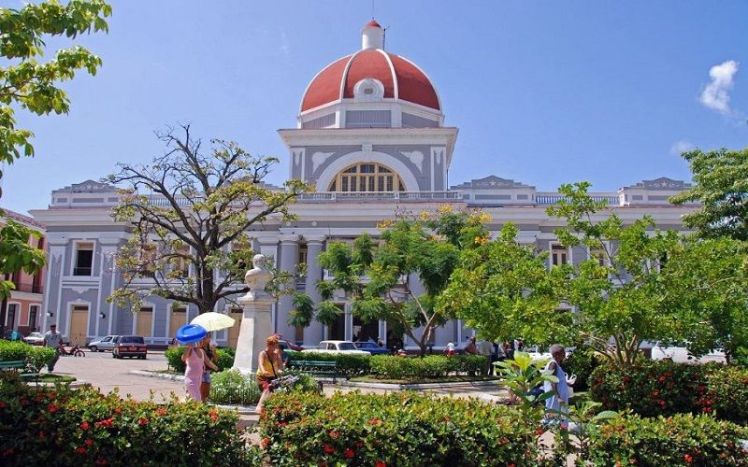 It is located in the old Plaza de Armas and was declared a National Monument.

3. Cathedral of the Immaculate Conception

Located opposite José Martí Park, it stands out for its tinted French stained glass windows, possibly the most artistic in Cuba. 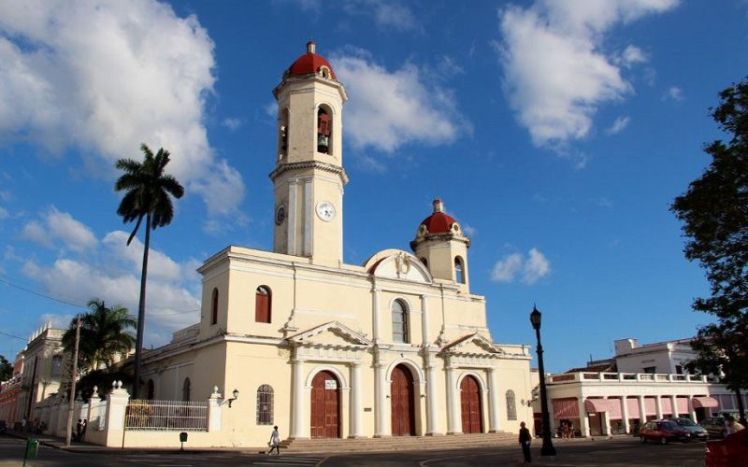 In neoclassical style, it was built in 1869, and stands out for its whitewashed walls and red tiles.

The Chinese characters that can be observed in its columns date from 1870.

Built in 1889, in its auditorium you can see its classicist style frescoes. Its name comes from a Venezuelan merchant who settled here. 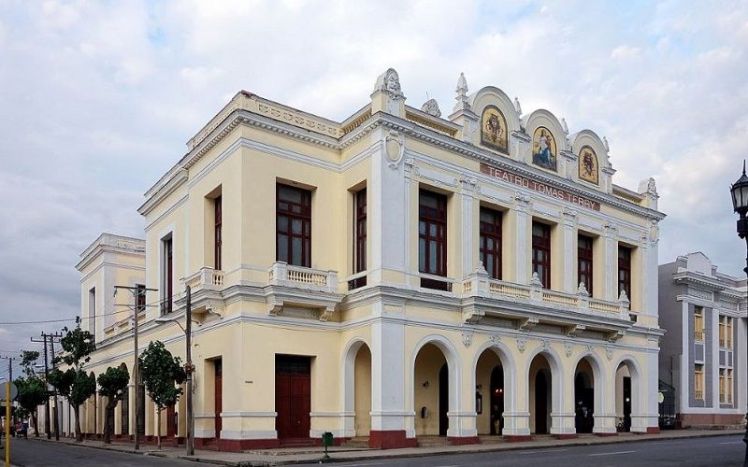 Declared a National Monument, it is located in the historical center of the city and counts on being one of the most elegant of the city.

Surprising its construction, both outside and inside. It has Italian influences. Its auditorium is shaped like a horseshoe and is decorated with Carrara marble.

You can not miss the Arc de Triomf, the only construction of its kind in Cuba, dedicated to the country’s independence. 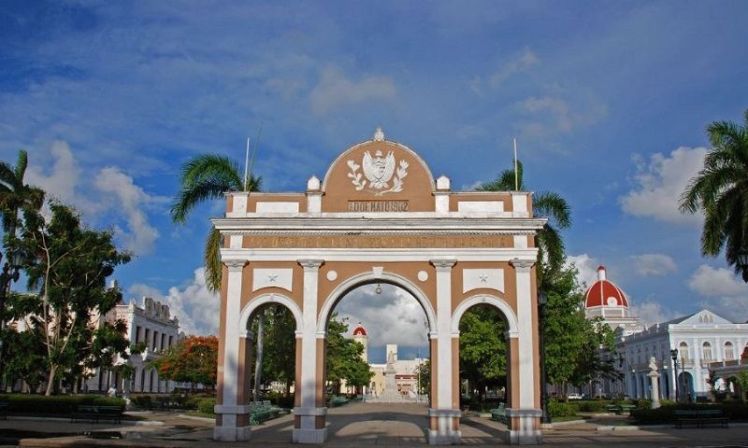 From this palace you can enjoy one of the best panoramic views of the city from its terrace.

It is located in the old Ferrer Palace of 1918, at the eastern end of the José Martí Park. 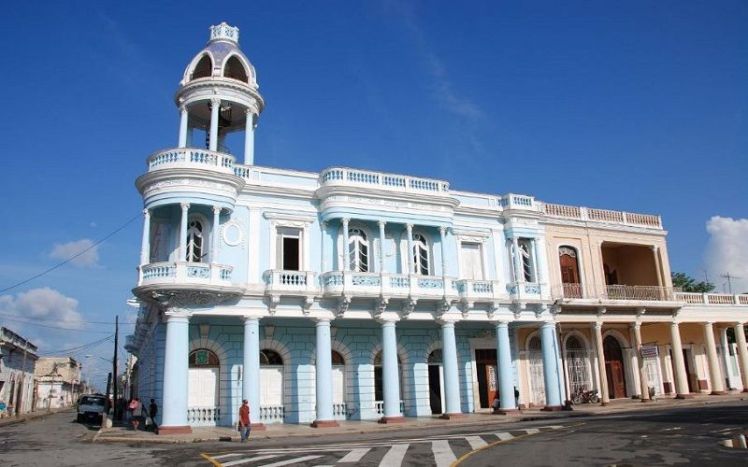 Neoclassical in style, it has Italian marble floors and a wrought iron staircase, topped by a dome.

It owes its name to the Captain General of Cuba in 1829, Jose Cienfuegos Jovellanos.

In this lively walk you will see a statue of the famous Benny Moré, a real-life Cuban singer and songwriter born in this province.

It is the longest street in Cuba, it reaches Punta Gorda. 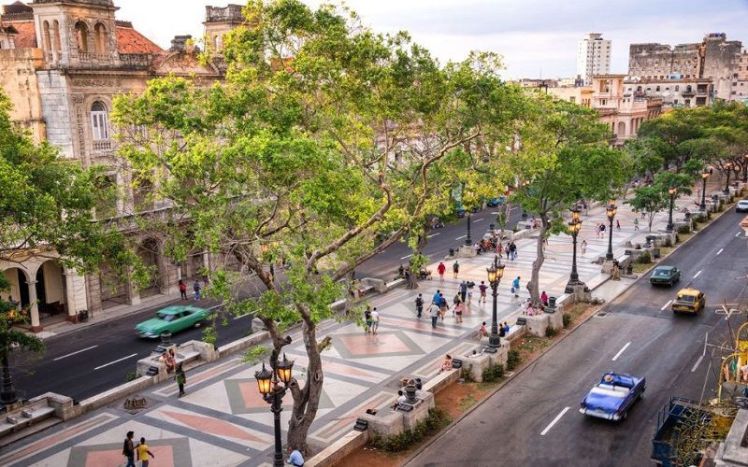 Interesting to take a walk on this walk seeing the walk to the cienfuegueros and see the buildings that flank this neoclassical park with its pastel columns. 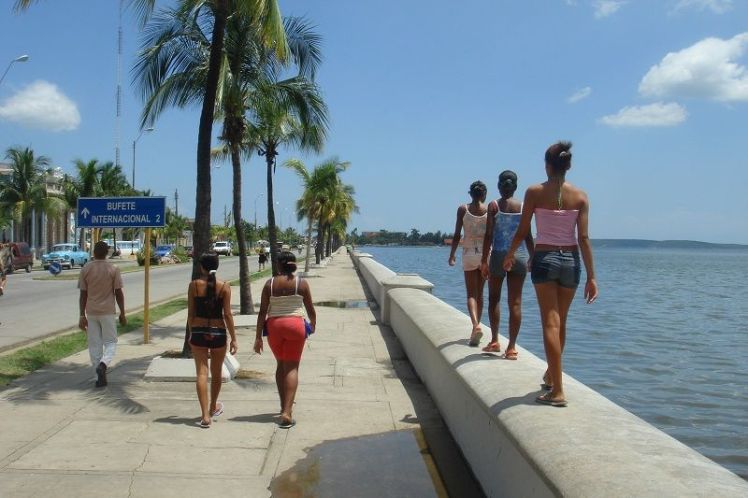 The street passes by the boardwalk that gives us a view of one of the most natural and beautiful bays of Cuba. 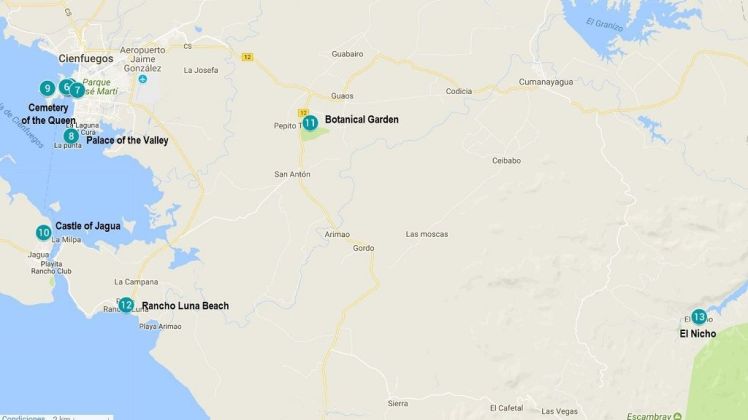 8. Palace of the Valley

This 1917 building is in the form of a Moroccan Kasbah. 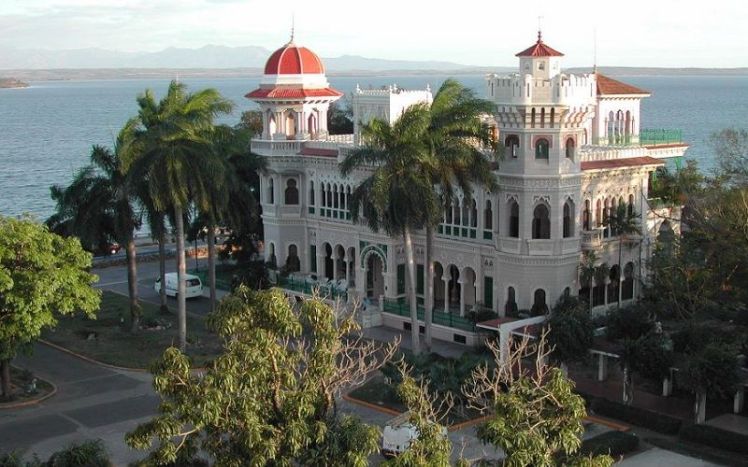 Exaggeratedly ornate, it has turrets and stands out for its colorful tiles.

Do not forget to visit its terrace where you have a bar to have something with excellent views. 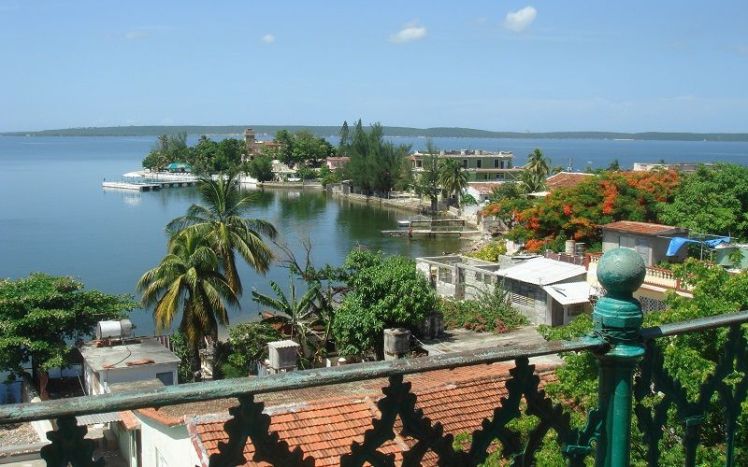 9. Cemetery of the Queen

It is the oldest cemetery in Cienfuegos, was founded in 1837.

In it we can see the tombs of Spanish soldiers who fought in the wars of independence. 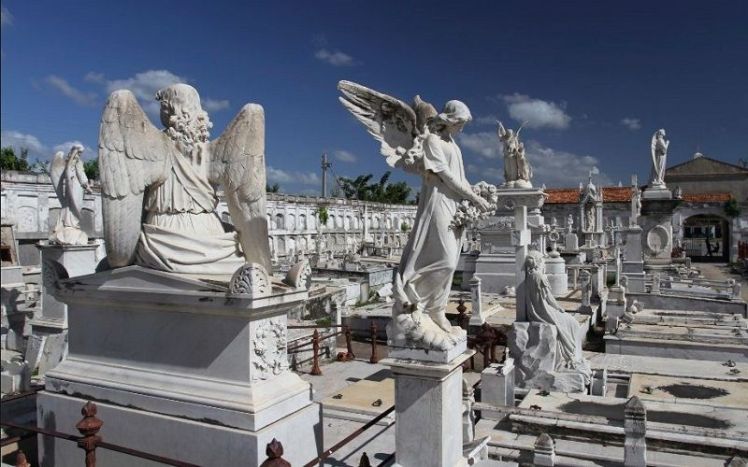 Declared national monument, in the we can see a marble statue known as, the Sleeping Beauty. It is a tribute to a woman who died at age 24, in 1907, with a broken heart.

The image represents this beautiful young woman asleep sweetly, leaning on a cross with a bouquet of poppies in the hand that symbolizes life, while with her left hand crushes a snake as an allusion to death. 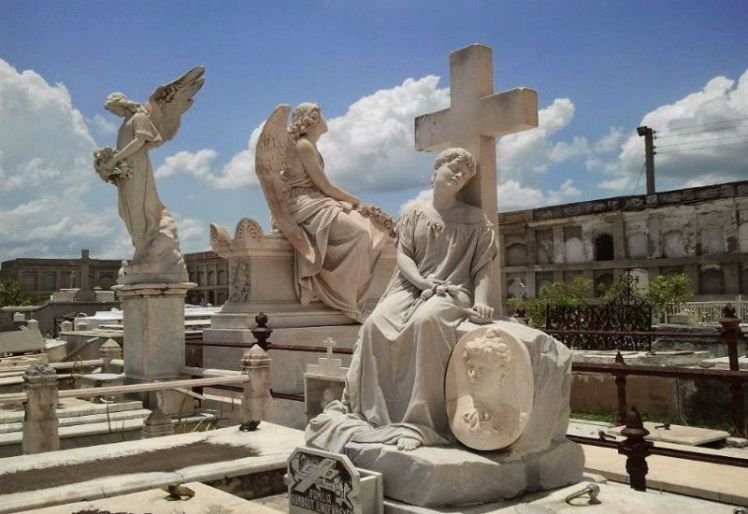 This castle has excellent views of the bay and has a museum and a restaurant. 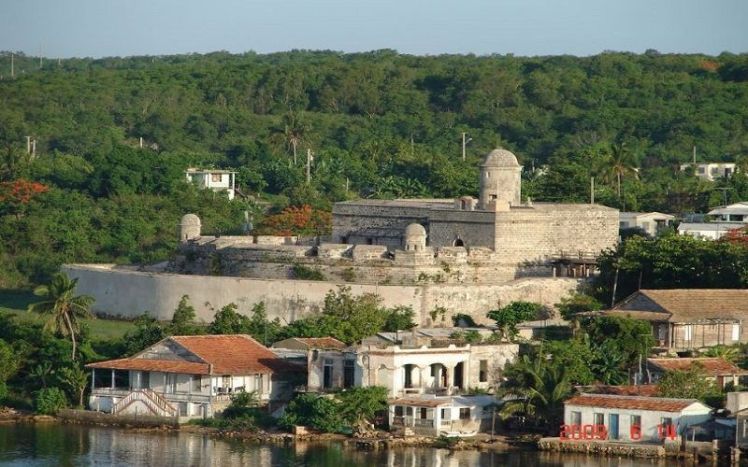 It was built in 1738, during the reign of Felipe V a century before the city of Cienfuegos was created, to protect itself against the attack of the pirates and the English.

It was considered as the third most important fortress in Cuba after those of Havana and Santiago.

You can go by ferry from Cienfuegos.

Undoubtedly, the most important botanical garden in Cuba.

With its 97 hectares, it is located on the outskirts of Cienfuegos.

It has more than 2,000 species of tropical and subtropical plants.

A good place to relax and snorkel on your coral reef. In 20 minutes by boat you can enjoy more than 30 points for diving.

About 18 kilometers from Cienfuegos, it is a small beach with turquoise waters.

To get here you can do it by bus, by ferry or by taxi for about 10 CUC.

Located in the Natural Park of Collantes. 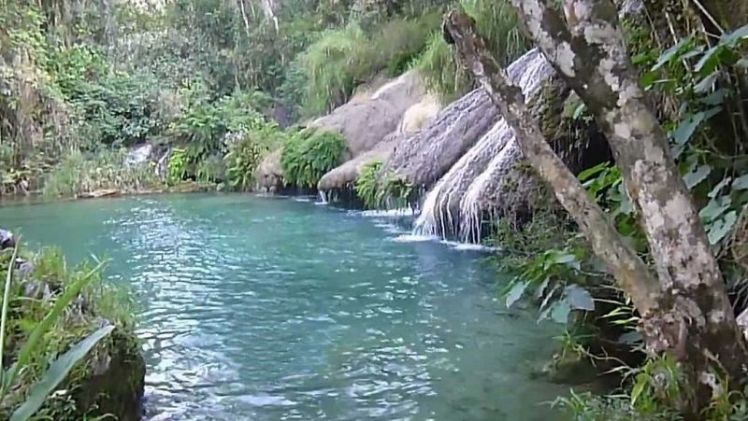 Its well named for the crystal clear waterfall found on the Hanabanilla River.

You can walk a path that is 1.5 kilometers long and is known as the Kingdom of the waters, you can swim in its natural pools, visit a cave, observe birds and rest and eat in a restaurant type ranchón.