Old Havana was declared Heritage of the Humanity in 1981.

Now I am going to show you a sample of a route in order that you visit the monuments and the most representative streets, but do not forget to visit other streets out of this route to be able to know how the Cuban lives, real Cuba, which most of the tourists do not know.

This walk has a tour of approximately 2,5 kilometers. It is possible to do calmly walking, doing photos and taking something occasionally while there is enjoyed his impressive architectural set simultaneously that is enjoyed his music while you take a little in someone of his many bars that you will find in the route.

The Central Park is placed in one of the most travelled zones of the Havana. It is a very tourist zone because here tourists find the hotels with more captivation of the Havana and is a zone of step to accede to the Old Havana. In him there meet every morning a group of fans of the baseball to discuss the tactics of his players.

This square surrounded with palms, is the point of union between the Old Havana and Havana Center.

In the center we can see the statue of Jose Martí, National hero of the Cuban independence and the first one that was raised in Cuba. This monument was inaugurated in 1905 in commemoration of 10 º anniversary of his death.

We will begin the route for the Old Havana in the Central Park. Around it we can see some of the buildings and more emblematic sites of the city.

The central park is very close to the streets Obispo and O’Reilly, these will lead you to the historical to the old town of the Old Havana.

Between the Great Theatre of the Havana and the Hotel England, we have the Boulevar San Rafael, it might say that it is a street Obispo relates of the famous Street. It occupies more than 20 streets and comes up to the University of the Havana in Vedado. 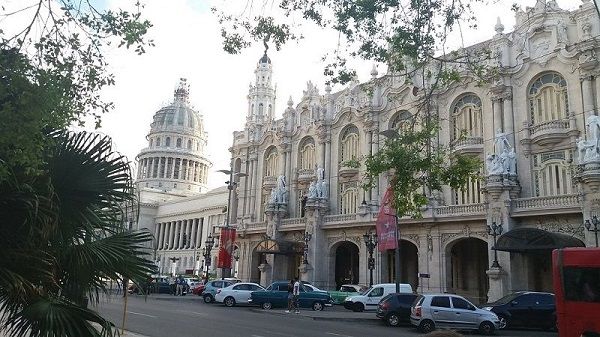 In the left side of the Great Theatre of Havana we can see the Capitolio of the Havana, which is a copy of the congress of Washington, and the Park of the Fraternidad, which was built in 1892 to commemorate the fourth centenary of the discovery of America.

In this zone we will be able to see great quantity of ancient American cars, known like almendrones, that are used as collective taxis on the part of the Cuban. They work as buses and have his own routes.

For tourist it is more comfortable to take the taxi, but it does not stop being an experience to try this way of transport for a day. Recommend you to ask for the price before taking the taxi.

The first obligatory stop could be the Floridita.

It is famous for two things, for being one of Hemingway’s favorite sites and for being the cradle of the Daiquirí. In the Floridita you will be able to enjoy Cuban live music.

The place is small and is very crowded. Here drinks are more expensive compared with other sites. Obliged moment is a photo to be done by Hemingway’s statue that is supported in the bar.

In 1519, four years after the Havana was founded, the street Obispo was designed. It is a long and narrow street in which his buildings do not have any more than three or four floors of height.

It is one of the most commercial and crowded zones of the city, an it’s an incomparable place to experience the atmosphere of the Old Havana.

In the middle of Obispo Street, on the right, in front of the number 408, you have an open-air market where you can buy souvenirs.

One street below, it forms a corner with Compostela, you will find la Dichosa (3).

One of my favorite places to stop and have a drink while enjoying good live music. The place is small and the environment is good.

One street below, it forms a corner with Habana, in the front you have the Lluvia de Oro (4), bigger and spacious, I surround other one where to do stop and to taste a good mojito, strained pineapple…

On the corner of Obispo with Mercaderes we can see the Hotel Ambos Mundos (5).

In the fifth floor, in the room 511, Ernest Hemingway resided the prize Nobel prize of literature between the year 1932 and 1939. Here he wrote works as ” For whom they double the bells “, ” The old man and the sea ” or “farewell to arm”

You can visit the bar that exists in the terrace and take anything while you enjoy the sights that these hotel offers us, the street Obispo.

This street possesses also the title of being the one that more books, for square meter, it shelters in the whole Cuba. In her there can be seen teachers’ works of the Cuban literature as Jose Martí, Alejo Carpentier or Leonardo Padura. Also, it possesses the complete works of Hemingway, Fidel Castro or the Che Guevara, without forgetting the works of contemporary Cuban authors.

The Arms Square is one of the most ancient and beautiful squares of the Havana. This one was built shortly after the city was founded, in 1519. It was the center of administrative officer in colonial times.

Formerly it was known as the Plaza of the Church, since in her the first church of the Havana was staying. The name Plaza of Weapon took place at the end of the 16th century, when the governor of the colony, who was living to the side, in the Castle of the Royal Force, started using this square to realize military exercises.

The site of the old church is now occupied by the Palace of the General Captains. It was his residence from 1791. When it finished the colonial domination of the Spanish, it started to be the seat of the US Intervenor Government between the year 1898 and 1902.

It was the Presidential palace of the Cuban Republic until 1913, and Town hall of the Havana until the year 1967, year in which the National Museum was destined to shelter.

From the square we can observe the Castle of the Royal Force. This one was the first strength that was constructed in Cuba.

In the high of his tower we can see his famous vane with a recreation of the Giraldilla, copy of that of Seville and that appears in the label of his famous ron Havana Club.

This square has a park formed by palm trees and ceibas. In its center is a statue of another of the Cuban heroes, Manuel de Céspedes, who stood out in the Ten Years’ War.

On one side there is another sculpture, that of the Spanish King Fernando VII, who presided over this square between 1834 and 1955.

This square hosts a small fair formed by booksellers and collectors. In it you can find books and bills and old coins, images and objects of interest of José Martí, Fidel Castro or Che Guevara.

7. The Plaza of San Francisco

From here, along Calle de los Oficios, we arrive at Plaza de San Francisco. In it you can find the Convent of San Francisco de Asís and its baroque style church. 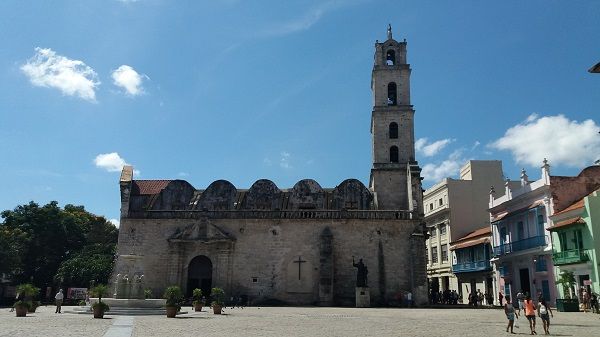 In front, the Lonja del Comercio, where stands a dome crowned with the statue of Mercury and a white marble fountain, the fountain of the Lions.

If we go to the streets Muralla or Teniente Rey we arrive at the Plaza Vieja. This was built in 1559.

We can also go through Mercaderes from Obispo Street, turning right at the corner of Ambos Mundos Hotel.

This was used in its origins to practice military exercises and public executions. Later it became a bullring and a market.

Currently, this square has many restaurants and terraces, including a brewery that serves beer and malt home-made, and in which you can see what is its process.

In the western area you can see a set of colonial houses that have some of the best stained glass.

10. Plaza of The Cathedral

We go through Mercaderes, Obispo direction and you will arrive at the Plaza de la Catedral.

On the way you will find the Chocolate Museum (9). In it you can have a hot, cold chocolate, or buy chocolates and rest and cool off with your air conditioning after a long walk.

It is one of the most beautiful squares in Old Havana. In it you can see several palaces with their porticos where you can protect yourself from the sun or tropical storms.

In 1560 it was a marshy place known as the Plazuela de la Ciénaga. It was drained and in it the Hermitage of San Ignacio was built.

The Cathedral was completed in 1777 on this site, paved and became the favorite place of the wealthiest families, where they ended up building their palaces.

In 1796 the remains of Christopher Columbus were moved to the Cathedral of Havana, and in 1898, with Cuban independence, his ashes traveled to Spain, where they rest since then in the Cathedral of Seville.

In this square we can see a life-size bronze statue of the dancer Antonio Gades, leaning against a column of the Palacio de Lombillo, which is what he used to do before entering the El Patio bar. He was an advocate of the Cuban revolution.

His remains rest in Sierra Maestra, in the mausoleum dedicated to combatants.

Along with the Floridita, one of the most famous bars in Havana. Above the counter there is a legend that says “Hemingway took his Mojito here”.

Sit in the Bodeguita del Medio and enjoy that unique atmosphere.Its shelves are full of memories of visitors such as Hemingway, Fidel Castro, Pablo Neruda or Salvador Allende among others, who drank a Mojito in its tin bar.

Its walls are covered with thousands of signatures left by tourists as it passes through this emblematic place. Their food, although somewhat expensive, is good.